The Skerries seals are a homage to all those sand castles that were built in Skerries over the many years, only to be washed away on the next high tide. 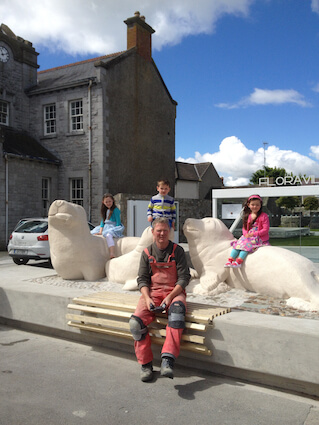 Portuguese limestone was chosen because ;  with weathering it will reflect a sand sculpture more and more as the years go by. Also within its surface crushed sea shells and crustaceans are revealed.

The three seals that make up the overall composition are larger than life in order to ‘scale’ into the setting in front of the Floraville park. They also allow the piece to be a ‘living sculpture’, in that the public and in particular children can sit on them.

The surface of the sculpture has been textured to reflect the patterns of the sea, the wave paving in the Floraville Park and celtic design seen in the stone round Newgrange. This was then contrasted with other textures for example the eyes, noses and fish are polished, while the whisker areas have a bush hammer effect. 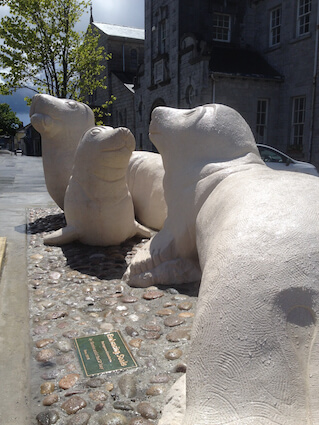 I wanted an overall surface to be tactile , varied in texture and look handmade as if it had only just been finished …. The ‘kid’ who made it had just popped off to get an ice cream!

The sculpture is entitled ‘Embracing Seals’ ; is dedicated to children and its aim is to evoke the happiness of being beside the sea.